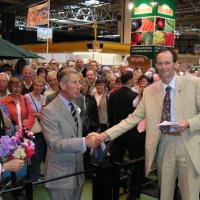 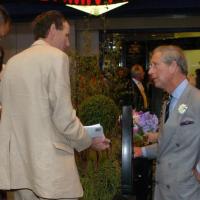 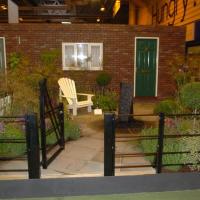 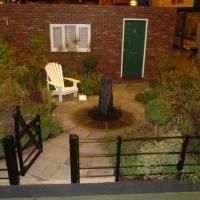 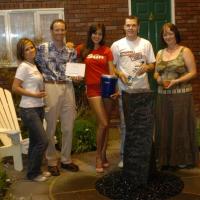 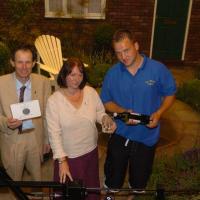 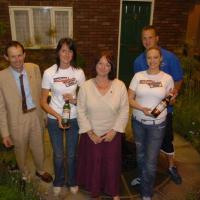 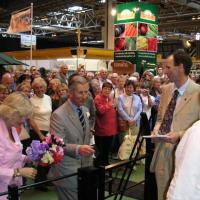 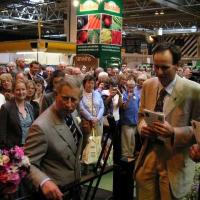 This year's garden "Bright and Breezy" built as part of sunflower street received the RHS Silver Medal at BBC Gardeners' World Live 2005 at the NEC in Birmingham.

On Wednesday 15th June HRH Prince Charles and the Duchess of Cornwall visited the garden at the show at the Birmingham NEC, and met Mr R Hewitt and his assistant Mr B Penfold, together with the designer Ms B Johnson.

The garden is part of the popular Sunflower Street Exhibit, inspired and organised by garden writer and broadcaster Peter Seabrook and Steve and Val Bradley. Sunflower Street is dedicated to the front garden, celebrating the space between the pavement and the front door, emphasising that it is very much a 'garden' and should be so much more than merely a place to leave the car.

This garden, called Bright and Breezy and sponsored by Cinzano, is no exception. At the centre of the garden is a hand-carved, granite water feature, a tall, black, twisted column surrounded by polished Chinese pebbles all surrounded by a circular path comprising paving by Westminster Stone providing the authentic warmth of Old York stone flags. To one side of the path is an Adirondack Chair (by Adirondack Outdoors), a traditional chair, incidentally invented in a front garden and designed to be the worlds most comfortable chair, the perfect place to stop, sit and watch the world go by. It is safe to say that there is no better place to do just that than in this particular garden. Though a very strong, geometric design, the garden retains the relaxed feeling due to the clever planting that cocoons the visitor - definitely the trademark planting of Beverly Johnson; clever use of colour and an innovative mix of grasses, herbaceous perennials and evergreen shrubs (courtesy of Palmstead www.palmstead.co.uk that seem to almost float, semi-hidden providing structure and colour throughout the entire year.

The whole project had to be built within two and a half very long days, to present for RHS judging. The hard work and months of preparation were rewarded with a coveted RHS Silver medal. This proves that Bob and Beverly are very much a winning team. Sunflower Street also won a highly commended award for the best show feature.

The highlight of the show was the Royal Visit by His Royal Highness Prince Charles, who spoke to Bob Hewitt and Ben Penfold. Prince Charles enquired about the garden and build up and was impressed by the planting, particularly the Lysimachia and the exclusive Lychnis coronaria 'Gardeners' World'. Camilla, Duchess of Cornwall was very impressed by the granite water feature, Peter Seabrook explained about the garden and that it was sponsored by Cinzano, the Duchess said she could do with a drink.

Highlights of the show and Sunflower street were shown on BBC gardener's world on Friday night and all six gardens in Sunflower Street were featured in Peter Seabrook's garden column in Saturday's 18th June edition of the Sun newspaper, as a result visitors made a point to visit Sunflower street during their day at the show.

Messages of congratulations were also received form the Chief Executive of the British Association of Landscape Industries, of which Mr Hewitt is an active member.