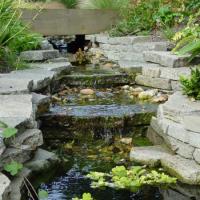 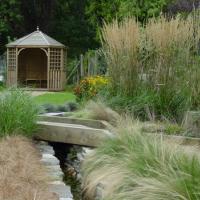 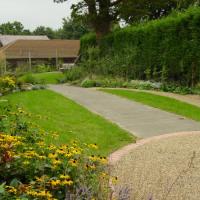 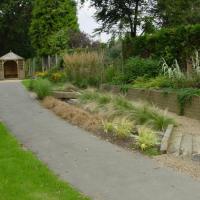 Horsham based R.G. Hewitt Landscapes and Designer Reg Wadie received a major award at the BALI National Landscape Awards 2005 held in London on Friday 18th November. The Awards, which are run annually by the British Association of Landscape Industries (BALI), pay tribute to landscapers who have demonstrated exceptionally high standards of professionalism and skill.

The pupils of the Queen Elizabeth II school have learning and mobility difficulties and their previous play ground was so small it could not accommodate all of them. The clients brief was to create a garden in an area of unusable school property that had lain vacant for some time.

Using the unusual topography of the area and the existing features to great effect, the garden provides areas to stimulate the students, attract wildlife, and allow time for quiet relaxation and contemplation for all who visit the garden.

Running alongside the main path is a rill, built from reclaimed broken paving. From a stone trough, water cascades over pebbles and waterfalls until it reaches a small pool and bog garden at the lower end of the garden. The sound of running water enhances the air of tranquillity within the garden. Planted alongside the rill are grasses that change colour with the seasons and gently move in the breeze. Reached by wide curving paths that wind their way through the garden a large sitting area has been created in front of the gazebo where outside study periods can be held. Planting is varied, has all year round interest and includes areas of native planting to provide wildlife benefits and links to the curriculum.

Commenting on the company's success, Reg/Robert said 'It was a great honour to win such a prestigious award â€“ The garden is loved by both the pupils and staff at the school and this was truly the icing on the cake.'